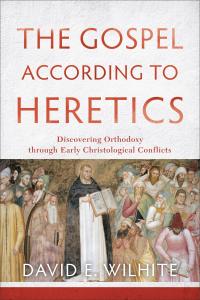 Arius is a major figure in church history, and rightfully so—it was his theology that led to one of the most defining moments in the development of the doctrine of the Trinity. Thanks to Arius, the First Council of Nicaea in AD 325 was called to clarify his error about the divinity of the Son of God. This landmark council led to the rejection of Arianism and the first step toward solidifying the Trinitarian doctrine all orthodox Christians now affirm.

In David Wilhite’s new book, The Gospel According to the Heretics, he lays out the major views and situations surrounding the major heretics/heresies of the early church. In regards to Arius, we actually know very little. Most of our information about him and his theology is found in the works of his opponents. Wilhite’s chapter on Arius (pp. 105-128) helpfully distills what we know about him and his teaching:

Arius’s views were rather straightforward:

The Trinity is a mystery to us in many ways, but Scripture and tradition give us language and concepts that allow us to affirm the doctrine. Though Arius was (rightly) condemned as a heretic at Nicaea, we should take our cue from him in working diligently to understand and clarify the doctrine of God. If our doctrine of God falters, everything else begins to falter with it. We saw that with Arius, and we see it still today.

Swinging the Pendulum Too Far | The Exchange

Four Ways to Kill a Movement | The Exchange

Churches Experiment with In-Person Gatherings but Many are Split and Unsure...

Can You Be Both a Micro Church and a Large Church...

Should a Pastor Pursue a PhD? | The Exchange