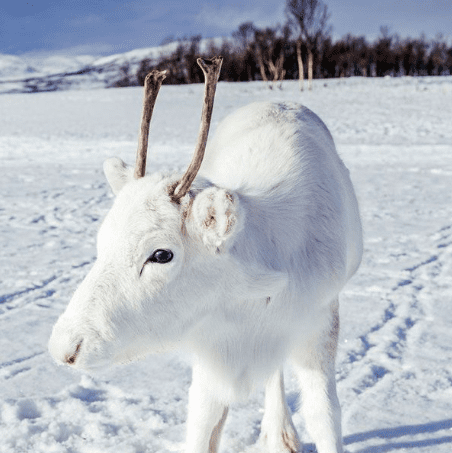 A white reindeer of beauty!

A Christmas miracle? We think so. A Norwegian photographer spotted a rare sight while he was hiking with friends. He captured a beautiful photograph of a white reindeer calf in the mountains of northern Norway. Mads Nordsveen, 24, from Oslo, captured the magnificent creature that seemed to almost blend in and disappear against the white snow. According to the BBC, he said, “He came to me very close and we looked into each other’s eyes. He was very calm when he saw that I did not have bad intentions. He behaved as if he was posing for my photos… he was very curious and funny, like a little explorer.”

In recent months, the name “Karen” has become a descriptor for a basic white lady of a certain age who is insufficiently clued in to the sensitive cultural mores of the moment. A recent New York Times column by Sarah Miller called “My So-Karen Life” described “Karens” thusly:

While everyone is complaining about boomers, Gen Z doesn’t want you to forget to complain about Generation X, the other generation that’s significantly older than them that also sucks. This sucking is embodied by the name Karen, the young people have noticed—middle-aged white moms who are always asking for the manager and calling the police on perfectly fine pool parties and wondering why kids are so obsessed with their identities.

I am a Gen Xer, but I can only say to the Gen Zs, I feel you on the Karen thing so hard. Having a Karen as a mom must suck, but also, just imagine having thousands of Karens as your constant nemeses, for your whole life.

Miller’s piece is, of course, just virtue signaling. It exists only to let people know she is not one of them. In this case, “them” being white women who grew up, matured, and either raised families, or conformed to workplace culture to advance in their careers. Or worse: both.

Because when you’re the one doing the pointing, you must be Good.

And so white women become “Karens,” men who respond to women’s tweets become “Reply Guys,” any music with a guitar in it becomes “Dad Rock.” And so on and so forth. Because othering is only problematic when the Karens do it. …

Labeling “Karens” as a monolithic entity based on race and age is exactly the type of stereotyping that today’s hyper-sensitives abhor when it gets applied to any other group. I happen to walk around in life surrounded by a diverse group of wonderful Karens: In addition to my high school friend Karen, there’s my sister Karen, who upended her life to move to Australia, where she now has three children. Another Gen X friend, is a brilliant writer and professor named Karyn. She recently won a contest for being able to make a sound like a Star Wars TIE fighter. (The prize: free movie popcorn for a year.) This is maybe not the type of thing that would cause people on Twitter to roll their eyes and say, “of course she’s a Karen.”

As a typical Karen would probably say, some of my best friends are Karens.

Our origins, evidently, are in Botswana.

Where was the evolutionary birthplace of modern humans? The East African Great Rift Valley has long been the favored contender – until today.

Our new research has used DNA to trace humanity’s earliest footsteps to a prehistoric wetland called Makgadikgadi-Okavango, south of the Great Zambezi River.

From my friend John Fea:

For most evangelical Christians, the message of the Gospel transcends the identity categories we place on human beings.  All men and women are sinners in need of redemption.  Citizenship in the Kingdom of God, made possible by Jesus’s death and resurrection, is available to all human beings regardless of their race, class, or gender.

I also think that most evangelicals believe that good Christians strive to live Holy Spirit-filled lives that conform to the moral teachings of the Bible. In other words, evangelical Christians follow the 10 Commandments, Jesus’s teachings in  the Gospels (including the Sermon on the Mount), and the ethical demands of the New Testament epistles.

Since Mark Galli wrote his Christianity Today editorial calling for the removal of Donald Trump, the evangelical defenders of the POTUS have been playing the populist card. Let’s remember that the populist card is an identity politics card.

The opponents of Christianity Today have tried to paint Galli and other evangelical anti-Trumpers as “elites” who look down their noses at uneducated or working class evangelicals.  In their minds, Galli and his ilk are guilty of the same kind of supposed moral preening as university professors, Barack Obama, and the progressive legislators known as “The Squad.”  They view these educated evangelicals–some of whom they might worship with on Sunday mornings–through the lens of class-based politics rather than as fellow believers in the Gospel of Jesus Christ.

This populist argument has come from a variety of sectors, including First Things magazine (here and here), the court evangelicals (here), and Calvinist Front Porcher and American religious historian Darryl Hart (here).

Brands we lost in the last decade:

The 2010s were a decade of extreme retail innovation. Instagrammy direct-to-consumer companies like Warby Parker and Everlane sprang up seemingly overnight; hulking businesses like Amazon permeated what felt like every aspect of our shopping lives.

There’s a cost, of course, to such breakneck change, and that came in the form of what’s been called the “retail apocalypse.” Not just the result of these new upstarts and consolidated power (private equity certainly did its part); the death of many traditional retail chains left hundreds of thousands without jobs, and the shuttering of countless storefronts.

We asked some of our favorite writers to eulogize the brands that meant a lot to them, which breathed their last in the past decade. (Since bankruptcy is so complicated — brands that file don’t always die, zombie companies resurrect themselves all the time — we allowed somewhat loose criteria here.) Here, a handful of remembrances for the retailers that shaped us.

Plastics, a good piece to read.

WASHINGTON (Reuters) – A cousin of the starfish that resides in the coral reefs of the Caribbean and Gulf of Mexico lacks eyes, but can still see, according to scientists who studied this creature that expands the boundaries of the sense of sight in the animal kingdom.

Researchers said on Thursday that the red brittle star, called Ophiocoma wendtii, is only the second creature known to be able to see without having eyes – known as extraocular vision – joining a single species of sea urchin.

It possesses this exotic capability thanks to light-sensing cells, called photoreceptors, covering its body and pigment cells, called chromatophores, that move during the day to facilitate the animal’s dramatic color change from a deep reddish-brown in daytime to a stripy beige at nighttime.

Brittle stars, with five radiating arms extending from a central disk, are related to starfish (also called sea stars), sea cucumbers, sea urchins and others in a group of marine invertebrates called echinoderms. They have a nervous system but no brain.

Atlases No More: Parenting During the COVID-19 Crucible | The Exchange

The Pivot in Our Mission: Keep the Main Thing the Main...

One-on-One with John Inazu on ‘Uncommon Ground: Living Faithfully in a...

The Convergence of the Missio Dei and the Imago Dei: A...