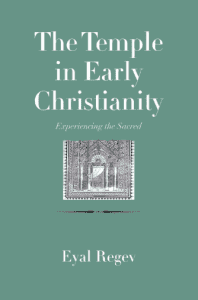 In his major — and very post supersessionist — study of the temple in earliest Christianity, Eyal Regev moves from the historical Jesus to the Letter to the Hebrews. His Anchor Bible Reference Library book is called The Temple in Early Christianity.

A very good, challenging, and academically helpful study of Temple in the grid of supersessionism and its various meanings.

His argument is a kind of “Not so fast, folks. The text does not say the temple has been replaced by Jesus, by the Eucharist, by the cross. In fact, the texts show that Jesus to the apostles thought of what Jesus accomplished by rethinking temple.” Over and over Regev summarizes his conclusions and repeats his conclusions and it makes for an easy read: one is never left wondering what Regev thinks. Here is his final conclusive summary:

… the narratives, images, and ideas of the NT authors attest to the richness of the Temple as an institution and an inspiring symbol. When Paul and the authors of the gospel of John, Revelation, and Hebrews need to explain who or what Christ is, to formulate new and radical Christologies, and to make them comprehensible to audiences who have at least some knowledge of the Hebrew/Greek Bible, they turn to the Temple and the sacrificial cult. For them, the cult is a vehicle for expressing their spiritual thoughts, experiences, and visions. They neither want to the Temple to disappear nor do they want to replace it; rather, they want to recreate the Temple and its cult in a new and symbolic manner.

Complementarians in Closed Rooms | The Exchange

How Do We Work Together Towards Racial Equality? An Important Conversation...

The Gundrys and Me: Ruth Tucker