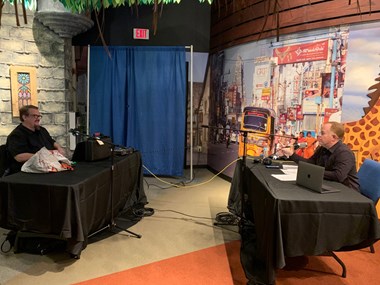 Wycliffe Bible Translators is literally working on making that Revelation 7 vision a reality. Today, I am broadcasting from the Discovery Center at the headquarters of Wycliffe with Dr. John Chestnut, the President and CEO.

We talk about the importance of having scripture in people’s own languages. I know my initial thought, and I’m sure the thought of many others, is that we should just teach people English, or the major language, and then give people those Bibles.

Why take all of the time to develop a Bible in another language, instead of just teaching them a new language and telling them about Jesus?

Dr. John Chestnut: That’s a great question. A lot of people don’t realize today, and I was one of those people not too many years ago, that there are over 7,000 languages in the world today. And still, in 2020, there are around 2,000 language communities that do not have any form of God’s Word in their language yet. It’s estimated that about 1.5 billion people do not have access to all of scripture in a language that they can understand. So you’d think because of travel, because of globalization and such, we do have more and more people that know more than one language. Multilingualism is more of the norm, rather than just speaking one language.

But when you think about it, even if someone can understand another language to about 75-80% competency, they still might miss important details. For example, think of a passage like John 3:16. If you were to go through and mark out 20% of the words in that particular verse, what would the word be that would be most difficult to understand? Oftentimes, they are the words that are most important in the passage. So when you think about it that way, even if people can understand another language, unless they have it in a language that they grew up with in their home, or that they think, dream, and pray in, the in-depth understanding of God’s Word can’t really happen.

Ed: This means that there’s a great task before us. To not just learn another language, but to translate into another language is a stunning amount of work. Talk to us a little bit about what that looks like.

John: Historically, we would send, or people would be called to, translate for a particular community. They would then move in to that community, begin to learn the language of wider communication for the region, and then would gradually learn the local language. They would then work with people from that community to help them have a deeper understanding of that language. Once they have that deeper understanding, they could begin to translate.

Today, we partner with people from these communities that may not have God’s Word, many of whom have education to some capacity. We are able to partner with these people who are already part of the community, who already have that deeper knowledge of the local language, who can move into a language of wider communication. We partner together differently. So even the way that Bible translation is done has shifted and changed.

Ed: Technology has accelerated translation, and given us a huge opportunity to get the Gospel into every language. Tell us more about that.

John: Yes, it has. So today, one of the tools that we use, and many translators use, is called Paratext. Paratext has all of the notes that which translators would need for various passages, so as they are working on a particular passage, they are able to have multiple translations visible at once. So, they can compare different, related languages to one another. That helps people, together, to determine how best to say something in the language that’s being translated into.

Listen to the full interview here.

PhDs: Who Needs Them? | The Exchange

Waking Up After QAnon: How Can the Church Respond? | The Exchange

The Unaffiliated Are Not the Unreachable: Understanding and Reaching the Nones...

Global Summit Celebrates the Tenth Anniversary of Diaspora… | The Exchange

Reading the Bible Fast and Slow